I’ve already had some feedback from people in my life saying why have you not included the good times in your life; simple, this is not my autobiography; this is my life journey of what made me into the person I am today living with C.P.T.S.D. Not one singular event but smaller events that grew with meaning as I did from a child to a teen to the horrors of my early 20’s.

So now you’ll start to learn about my background and how and what made me into the person I am proud to be today.

My Grandfather used to “visit”, not that often thank god as it turns out. He had what could only be described a fetish for “Little girls underwear”, you may say not so bad but did that make it right?

Almost always just out of plain sight of my mother; he numerously “explored” what I was wearing. I never said anything, this was Grandad and I feared him more than I loved him. I just made myself scarce when he visited but most times it was unavoidable that at some stage I had to say ” Hi” to granddad and sit on his lap, seemed innocent enough at the time but when heads were turned, he “explored”. I’m not sure what he liked most” the event itself or the thrill of getting caught”. I hated the smell of him smoking. I hated everything about him.

By the time I’d finished primary school I’d been to 5 different schools. Why you may ask, well my Father was a commercial pilot and mum had time on her hands. Mum decided she wanted to be the house mother at Dr Barnardo’s in Ryde.

I was seven and I’ll admit that being surrounded by so many other children that were in all sorts of stages of desperation, abuse and life made me feel sympathy and empathy for them. Some of them were young as 2 years old.

Initially I was proud of what my mother had embarked on doing but then she had little understanding of the potential consequences. At the tender age of 7, I learned along the way. Some of the homes would not allow us to attend the same schools so we had to go to a different school.

Mum later told me (in my 30’s) that she had been warned about potential effects on her own children. Mum had such a huge heart she wanted to help everyone. And that’s just who she is.

Next came a home called “Charlton boys home”, I hated it from the get-go, I was eight. Again we couldn’t attend the same school as the kids in the home. These kids were delinquents from the court system, too young to go to jail and nowhere else for them other than “Yazmar”. I’m sure that my older brother (by one year) didn’t face the challenges of fitting in as I did, I was a “girl”.

Mum and Dad had been warned at this stage that it was not ideal to have a young daughter or son involved with the running of this home. There were only so many sets of eyes and they could not be on me at all times.

Next came Melrose Boys Home, again not recommended due to my age to my parents but they thought it was a good lesson to show me “how to share”, I was nine. Far out, I could have thought of some many more appropriate ways to teach us that but, they were the grown-ups and we were the children.

Again my brother settled in well and I tried to do the best I could. I hated that my mother’s priority was other kids and not us; mum was more focused on there “poor kids” that the focus on my brother and I slipped. Mum hated the fact that the kids knew in advance what was for dinner each night so she put her wages into the measley budget they gave her to feed the kids and she started cooking meals that the kids hadn’t had in ages and certainly she changed them knowing what was for dinner each night.

It was her surprise for them. I knew that her looking after these kids was what she wanted to do but I thought enough, you’ve already helped so many. And I was relieved she decided to take a break. We would again be 4. I was close to my brother at this stage but once we moved onto the next chapter it was like he “tapped out” of being my big brother and protector and has never really “tapped back in”.

We had a break for a couple of years until I was about 11, I came home to mum saying; your father and I have decided to adopt/Foster Vietnamese boat people. I pleaded with mum, please can we have some girls?

At that time there were more men than women as the pirates intercepted most boats and took the women away, raped them and threw them overboard. And one by one they started to arrive, all boys/young men. I was devastated as from the get-go they referred to my mother and father as mum and dad. That was hard for me to hear and understand – they were my mum and dad and no one asked my brother and I if it was ok. For me it wasn’t and still to this day upsets me.

I have never been asked by any of the refugees they looked after, how I felt about it and if “I” was coping. I could manage us helping them but calling my mum and dad as their own was a step too far for me.

At that stage, we lived in a rural town and to introduce half a dozen Vietnamese boat people to the town’s population was let’s say, controversial.

Then there was all the talking at the dinner table and in general all in Vietnamese, I was uncomfortable as I didn’t know what they were saying. I understood they had limited English but this for me was a struggle. At school, I was bullied, had my head flushed down the toilet, was forced into corners that had to fight out of and was put in detention numerous times.

We were taught at all times not to be racists and to challenge and educate anyone who was. This made my life hell! I hated school, I hated existing. I kept thinking why didn’t anyone think of these consequences?

I felt selfish and kept it to myself. I had a horse given to me by a neighbor’s friend and she became my everything, my confidante, my best friend.

Mum used to say “you have no idea what these people have been through” but unknown to her I “did” more than understand. She would tell me over and over what they had been through and I understood how hard it must have been for them but I felt like I was invisible.

Why could nobody see how this was affecting me; at school, my confidence, my school grades were declining but guess what the Vietnamese were great at maths and I was crap, did anyone join the dots??? Nope. This is a grudge I hold till this day as I know it has limited my career to an extent (petty I know but it still gets rubbed in my face oh,xxxxx has 2 jaguars etc).

I chose to rise to the top under my own determination and taught myself. I’m not saying my brother and I were neglected but I can say that more focus was on “others in need”. There were a few other “controversial incidents” that I will keep to myself at this time but the people involved know what they did, enough said.

This brings me to year 7, my first year in high school=Hell. We have SBS come and do a story on our “amazing” family and the film crew followed us for a whole week. Mum was also on the Mike Walsh at midday and never was it mentioned the effects on her own children rather the focus on “those in need” and the good work she was doing with them.

She deserved the accolades, as she had done a lot, don’t get me wrong.

Even at this tender age; approaching being a teenager, hormones, puberty etc. I mostly navigated this on my own. By this stage, I had felt that every “Mother’s Day or Father’s Day” I was always outdone by what I could afford to buy or make them. To this day it’s the same.

I moved from feeling like a bitch to why didn’t anyone understand how this was affecting “my Life”.

This is when life really started to unravel for me. I was naive, insecure and angry, I was 14.

I caught the train to the city feeling like nobody would give a crap or even notice instead of being at school. I was alone, not with a friend, I was alone.

I caught the train to Town Hall then wandered over to a nearby park and just sat and daydreamed. I was approached by a gentleman who said he was a scout for models and thought I would be perfect. I was slowly reeled in by his story of how I could be made famous and everyone would know my name and I’d do magazine covers. He said his “studio” was just around the corner and why don’t I come and do a photo-shoot, fully clothed nothing to worry about, he was legit.

He wasn’t legit! I went back to his “studio” which turned out to be an apartment and when we got to his floor he opened the door and I straight away felt uncomfortable enough that when he said he was going into the next room to set-up for the shoot, I bolted out the door, down the fire escape and on the first train out of the city towards home. I never told a soul.

This is all I can write at this time as it’s confronting on a lot of levels. I will continue this I promise as it’s just as important to share my journey as it is.

Previous Story
Therapy Dog vs Service Dog
Next Story
How to Engage Children & a Parent with P.T.S.D 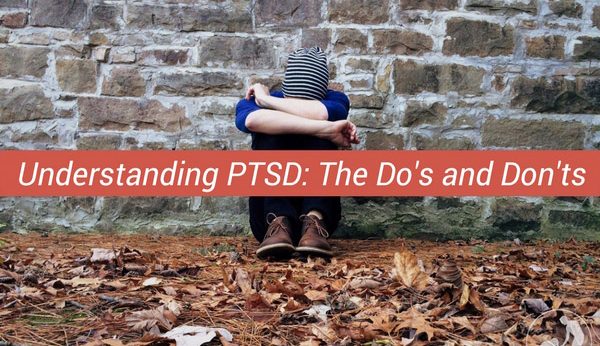